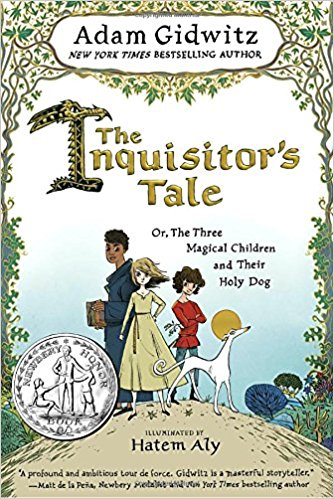 1242. On a dark night, travelers from across France cross paths at an inn and begin to tell stories of three children. Their adventures take them on a chase through France: they are taken captive by knights, sit alongside a king, and save the land from a farting dragon. On the run to escape prejudice and persecution and save precious and holy texts from being burned, their quest drives them forward to a final showdown at Mont Saint-Michel, where all will come to question if these children can perform the miracles of saints.

Join William, an oblate on a mission from his monastery; Jacob, a Jewish boy who has fled his burning village; and Jeanne, a peasant girl who hides her prophetic visions. They are accompanied by Jeanne’s loyal greyhound, Gwenforte . . . recently brought back from the dead. Told in multiple voices, in a style reminiscent of The Canterbury Tales, our narrator collects their stories and the saga of these three unlikely allies begins to come together.

The Inquisitor’s Tale, written by Adam Gidwitz and illuminated by Hatem Aly, is a smart, thought-provoking and tightly-crafted work of art. From the beautifully detailed illustrations to the incredibly researched historical data, this book pulls you in to its world in so many ways. The book feels like an old tome which helps set the stage, then the narrative style makes the reader feel like they are seated at the table in the pub alongside the book’s characters. The story unfolds in a beautiful and almost poetic way, as the reader is introduced to the children and discovers why the King of France has declared war against them.

With a diverse cast of characters, the book examines what it means to be a friend, religion, and the power of words. From the spoken words of the narrators to the written words that spur the children to action, the reader sees that words, rumors and stories can change the course of history. While this is a work of fiction, there are many historical accuracies and hidden truths woven throughout the telling of the children’s adventures. I don’t have enough words to capture the wonder and beauty of this magically spun tale.

Religion does play a major role in the text, but I think the book can be enjoyed by those of any faith, as the children reflect on what faith is and what religion really means.

Children and adults can enjoy this charming tale featuring a wide cast of intriguing characters and a setting as rich and wonderful as the book’s illuminations. Highly recommended for children of all ages.

One thought on “Book Review: The Inquisitor’s Tale”