Oh my goodness, what to say about this book!

Firstly, I can say I loved it. And secondly, I can’t stop thinking about it.

This is actually a review of a specific edition…the newly released Special Collectors’ Edition and it is, in a word, stunning!

A Monster Calls was first published in 2011, but I only recently heard about it. I read a review on a blog I follow, and I was about to purchase a copy when the opportunity to get a review copy came up. It really seemed like it was meant to be 🙂

The story behind the novel is as fascinating as the novel itself and I loved all the bonus material as well as learning more about Siobhan Dowd who drafted the original idea for this story but passed away before she could write it.

Drawing from Siobhan Dowd’s original idea and outline, Patrick Ness wrote A Monster Calls. Writing a book from another’s notes presented a daunting task and he worried about doing her idea justice. His goal with A Monster Calls was both to stay true to Siobhan’s original idea but not try to imitate her and instead write a story he felt she would enjoy.

I’m curious to read her books after learning more about her, and while I have no idea what type of book she would like, I feel A Monster Calls is a beautiful work and a moving tribute to her life. 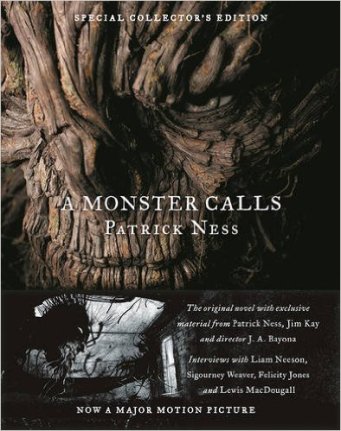 The monster arrives outside Conor’s window just after midnight. He’s just awoken from his nightmare, so he can’t possibly be dreaming, and this is definitely not the monster from his nightmares. That monster has tormented his dreams each night since his mother started her treatments, but now this new monster arrives and though it is huge and wild, Conor finds himself drawn to it. But the monster wants something from Conor. It wants something terrible and real, and Conor doesn’t want to give what the monster wants.

A Monster Calls, written by Patrick Ness and illustrated by Jim Kay, will draw the reader into Conor’s world with the very first line.

“The monster showed up just after midnight. As they do.”

Patrick Ness writes beautifully, and every passage breathes magic. From the monster’s first words, to his last, he is a rich and developed character. This is magical realism at its best.

Conor is easy to relate to and sympathize with as he struggles with his mother’s illness. The interactions between him and the monster are moving, amusing, and at times heart breaking. Stubborn, willful, but at his core a very good child, the reader will suffer as Conor suffers.

There are not enough words to capture the magic felt while reading this book, and I think part of this feeling stems from the incredible illustrations. In this special edition, the illustrations are discussed in detail and I gained an even greater appreciation for the thought and time that went into the production of this work of art. For it truly is a masterpiece.

This edition would make a beautiful and treasured gift for any book lover in your life.

5 stars and more to fill the midnight sky

The movie released in Spain early in October, and in the U.S., a limited release of the movie is scheduled for sometime in December of this year.

The movie stars Liam Neeson, Sigourney Weaver, Felicity Jones and Lewis MacDougall. And the screenplay was written by Patrick Ness.

Thank you to Candlewick Press for a copy of this book in exchange for my honest review.